Background
According to a recent study published in the US News and World Report the cost of medical malpractice in the United States is $55.6 billion a year, which is 2.4 percent of annual health-care spending. Another 2011 study published in the New England Journal of Medicine revealed that annually, during the period
1991 to 2005, 7.4% of all physicians licensed in the US had a malpractice claim. These staggering numbers not only contribute to the high cost of health care, but the size of successful malpractice claims also contributes to high premiums for medical malpractice insurance.

The Task
Using descriptive statistics and graphical displays, explore claim payment amounts, and identify factors that appear to influence the amount of the payment.

The Data             MedicalMalpractice.jmp
The data set contains information about the last 118 claim payments made, covering a six month period.
The eight variables in the data table are described below:

The variables are coded in JMP with a Continuous, Ordinal or Nominal modeling type. This coding helps to make sure that JMP performs the correct analysis and produces appropriate graphs.
A first step in any analysis is to ensure that your variables have the correct Modeling Type:

Analysis
We begin by looking at the key variable of interest, the amount of claim payment. Exhibit 1 displays a histogram and summary statistics for Amount.

From Exhibit 1 we see that the histogram of Amount is skewed right, meaning that there is a long tail, with several very high payments. The mean (average) payment is _______ while the median (middle) is ___________. When a histogram is right skewed, as is the case here, the mean will exceed the median. This is because the mean is influenced by extreme values – the high payments that we observe in the histogram inflate the mean.

Other useful summary statistics are the quartiles. The first quartile (next to 25.0% in Exhibit 1) is ________ and the third quartile (next to 75.0%) is __________. The interquartile range, defined as Q3 – Q1, is a measure of the amount of spread or variability in the middle 50% of the data. This value is
displayed graphically in the outlier box plot (above the histogram). A larger version of this plot is displayed below.

(Notes: The center of the diamond is the mean. We will discuss this in a few moments. The red bracket at the top, which we won’t discuss further, denotes the “densest” region of the data.)

The outlier box plot helps us to visually identify potential outliers. The rule of thumb used to distinguish outliers from non-outliers is this: if the histogram is approximately normal, or bell-shaped, outliers are those points that extend beyond 1.5 IQRs of the box. The line extending from the right edge of the box,
called a whisker, is roughly 1.5 IQRs in length (we say “roughly”, because it is actually drawn to the furthest point within that range, so it may not be quite 1.5 IQRs).

Let’s ignore, for sake of illustration, the fact that our data are right skewed. There are 16 points beyond the whisker, which we will consider to be outliers. In this case, the outliers are those points that are much larger than the rest.

Having identified several outliers, what should we do about them? Let’s consider removing them from the analysis. To do so, we will hide and exclude the points (rather than simply deleting them). Hide removes points from graphs, while Exclude removes them from future calculations.

Exhibit 2 is the new histogram for Amount after excluding and hiding the 16 outliers.

Note that there are now seven (7) new outliers! We might as well get rid of those seven outliers as well.
The result is shown in Exhibit 3.

Exhibit 3 Amount after excluding and hiding a total 23 outliers 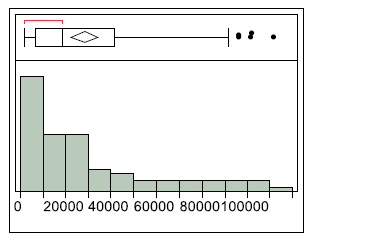 OK, so now we have six more outliers. How long can this game go on? You’re welcome to continue excluding and hiding outliers as you see fit. Or perhaps you’ve gotten the message: discarding outliers from a skewed distribution is an exercise in futility, since observations that didn’t stand out at first will appear to be outliers after excluding the most extreme observations. Removing observations in this situation just forces other observations to take their place.

There’s an even more important reason not to exclude outliers from the analysis. There’s nothing wrong with those “outliers” — they’re just bigger than most of the other payments. By excluding the 23 outliers, we have removed the really high claim payments made by the insurance company. The average calculated on the remaining observations is $28,306, a number less than one-third the original average. Imagine that the company uses the average and range of the truncated data set to forecast future payments. Upper management will be unpleasantly surprised to find many year-end actual payments
greatly exceeding the predicted payments and you, as the firm statistician, may well be out of a job.

In other words, why discard data points just because they’re unusual or inconvenient? There is great danger in the knee-jerk exclusion of outliers. We’ll see some examples in future cases in which excluding outliers might make sense. The message here is to avoid doing so without good reason.

Let’s now turn to other variables in the data set.

First, we make sure none of the observations are hidden or excluded. The distribution of Age is shown in Exhibit 4.

(Use Rows > Clear Row States to unhide and unexclude.)

The shape of this histogram is quite different from that of Amount, which was highly skewed right. Age doesn’t appear overly skewed, and the histogram is nearly symmetric. A symmetric distribution looks about the same on the right side as the left.

Now, we’ll examine the outlier box plot of Age. Once again, we’ve reproduced the box plot below. Recall that the peak of the diamond is the position of the mean. This outlier box plot tells us that the mean and median are quite close and, therefore, that the distribution is nearly symmetric. Because no points are shown beyond the whiskers, this outlier box also indicates an absence of potential outliers.